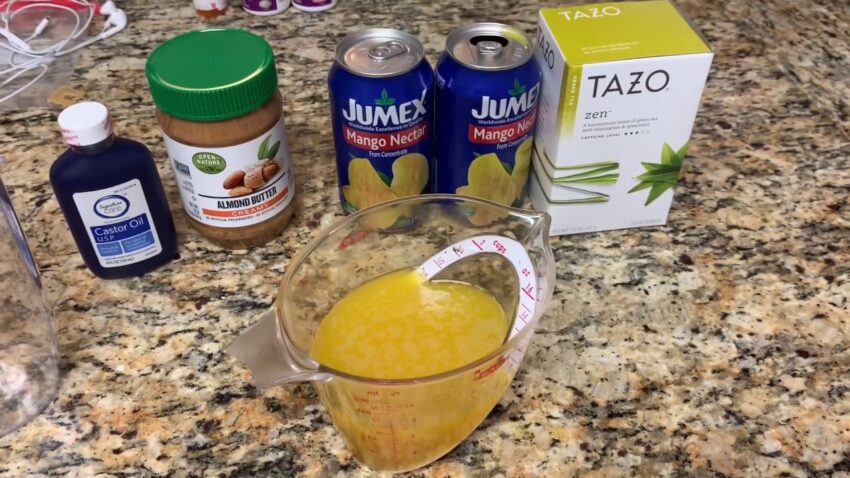 The Midwives brew is a concoction containing a number of components that helps to improve labor in pregnant women. Another name for this drink is the German Labor Cocktail.

This brew comprises of almond butter, castor oil, lemon verbena, and apricot. You may either drink it cold or heated, like a cup of tea, depending on your preference.

In this article, you will learn the midwives brew recipe and how it benefits your childbirth.

Castor oil is often used as a laxative. This is due to the fact that castor oil has been shown to trigger gastrointestinal spasms when taken orally. Similarly, it can produce spasms in the uterine muscles, which can result to contractions and initiate birth.

However, castor oil can cause digestive problems, nausea, and vomiting if used in large amounts. In a nutshell, it’s nasty.

The risk of dehydration when consuming castor oil is quite high. In addition, castor oil may produce contractions that are erratic or uncomfortable. For both mother and child, this may be draining and stressful. Using castor oil during pregnancy without medical care is dangerous for both the mother and the unborn child.

Additionally, castor oil should never be ingested before the full term of pregnancy due to the threat it poses to the unborn child.

Several vitamins and minerals may be found in apricot juice. Apricots are generally safe to eat during pregnancy unless you have an allergy to them. However, moderation is the key to a healthy diet!

Lemon verbena tea is largely used to hide the castor oil’s overwhelming flavor. Pregnant women may benefit from using it as a sedative to help them relax during labor.

When it comes to formulas, there are a number of options, but this one seems to be the most common and often followed:

Instructions: After 10 minutes of steeping in boiling water, add the Verbana Tea and other ingredients to a blender and process until smooth. Remove from blender and serve immediately.

If you can’t get verbena tea, use mango nectar, and pineapple juice in place of apricot juice.

It has been said that the flavor is unpleasant and that it may wreak havoc on your stomach, so don’t take it lying down!

What is the best time for taking midwives brew recipe

It’s normal to be anxious to meet your kid and eager for the delivery to happen as soon as possible, but you should exercise patience and wait until the entire period of pregnancy has passed before having your child.

Premature births are more likely to have health complications if the pregnancy term is not completed if the baby is delivered before the due date. To be on the safe side for both you and your unborn child, you should wait until you are at least 40 weeks along in your pregnancy, whichever comes first.

It takes time for your body to prepare for childbirth, and it may not be ready for preterm labor. Having a cesarean section rather than a normal birth may be the only option if your body isn’t ready for labor. So, once your term is through, wait to see whether you start dilating, and if you don’t, ask your doctor or midwife for permission to try the Midwives Brew. At 36 weeks, midwife brew is not recommended. As long as you get the doctor’s permission to use Midwives brew before the end of your pregnancy, you can.

Vomiting: The strong flavor of castor oil might cause nausea and vomiting in some people. As a result, you may feel sick or vomit as a result.

Diarrhea: Castor oil is a common laxative, which means it might cause diarrhea and dehydration. Dehydration is a common side effect of diarrhea. Drink plenty of drinks to keep your body hydrated.

Weakness: As it contains Lemon Verbena tea, it may cause fatigue or sluggishness in those who use it. In such a case, take a nap.

Abnormal contractions: Spasms in the uterine muscles caused by castor oil lead to irregular contractions. Occasionally, the contractions might be irregular and create additional discomfort.

Can harm baby: Do not drink this brew when you are pregnant, since it can harm your unborn child. Pregnant women should get the counsel of their doctor before ingesting castor oil since it might be harmful to the fetus.

Dizziness: In some women, castor oil has been linked to dizziness, so it’s best to avoid drinking this concoction alone if you experience this side effect.